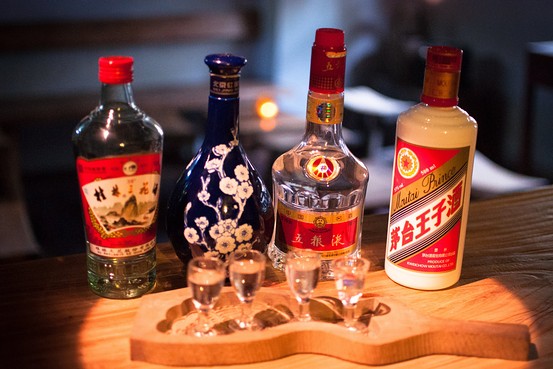 HOW IS BAIJIU MADE?

Baijiu is typically made by mixing steamed sorghum grains, water, and a special fermentation agent called jiuqu (酒曲 jiǔqū). It is then aged in an underground pit or buried jar for anywhere from a month to 30 years. Jiuqu is extremely sensitive to the surrounding environment of the area it is produced in, making the taste of each region’s baijiu distinct. Each distillery closely guards its particular strand of jiuqu, and having been made China’s national drink in the 1950’s, Maotai’s strain is even protected as a state secret, part of China’s intangible cultural heritage.

Unlike tequila or vodka, baijiu (白酒 báijiǔ), which literally means “clear liquor,” has yet to become popular in the West. To the unfamiliar palate, baijiu can smell and taste quite strong, and Dan Rather once compared its taste to “liquid razor blades.” Baijiu has gained a bad reputation amongst Westerners who have been to China because of the way it is consumed in bouts at the banquets and celebratory dinners that are part of doing business in China. Baijiu is a complex drink that takes time for an unfamiliar palette to adjust to. However, if you can learn to appreciate its distinct savory flavor, it can make your experience at such occasions much more enjoyable and help you appreciate something of Chinese culture.

The earliest known evidence of human alcohol production is from Jiahu, China, where people started making wine from rice, honey, and fruits 9,000 years ago.

Drinking culture is very important in China, and the ritual of drinking baijiu is typically an important part of building and maintaining guanxi, or relationships. If you are doing business in China, it might be a good idea to familiarize yourself with the taste of baijiu, and be prepared to drink it with partners, colleagues, or friends. In Chinese culture, the more a person gets drunk from being toasted by their company, the more face is conferred upon them. Baijiu is usually served in tiny thimble-sized wine goblets and toasted many times over one meal or sitting. You should remember that drinking baijiu can bridge cultural gaps, and your hosts will be pleased with your willingness to drink it.