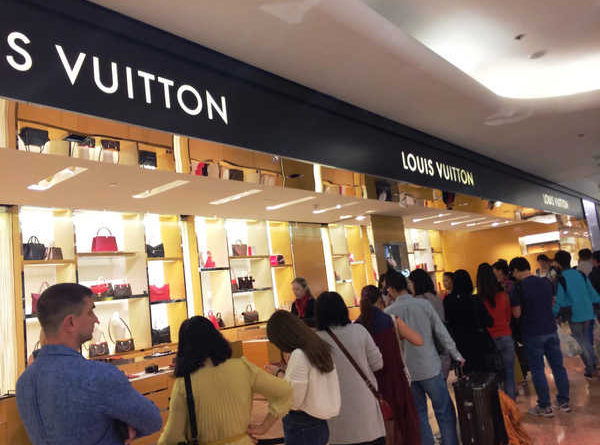 In business, we refer trading up as increasing the number of features (and their associated benefits) of a product, improving its quality, or backing it with a superior level of service to justify a higher price. The opposite is trading down. It’s reducing the number of features (and their associated benefits) or the quality of a product to suit the selling  price demanded by its customers. so would you prefer to pay more to buy a cup of starbucks coffe(trading up), or buy a cheaper one based on its price-performance ratio(trading down). Let’s take a look at how consumers in china tend to react.

The mainforce of consumption in china: the middle-class


The nominal GDP growth rate of the Chinese economy over the past 30 years exceeds that of any country in the world. It is one of the biggest miracles of the global economy in the past 100 years, and it also brings huge benefits for the middle-class.


According to the McKinsey report, the middle class in China is a population with an annual income of 11,500 to 43,000 U.S. dollars (corresponding to 75,000 to 280,000 RMB annual salary). This population has grown from 5 million in 2000 to 225 million today, and it is expected to increase to 275 million by 2020. This population figure will exceed the total population of Europe.

Although China’s population is aging, the middle class is still relatively young. Under the age of 35, most have received college education, 80% of them own one or more real estates, have only one child, and live in big cities.

Key feature of the middle class in china: freedom and independence

The middle class, as a highly educated group, increasingly seeks freedom and independence. They embrace Western culture and ideas. It’s quite common in china that the age of marriage is getting late and even the rate of divorce has increased dramatically. In the past, people liked to use “sheng nan” （means leftover males in English) to describe these single middle-class people. The fact is that with the improvement of education, it is normal for the entire population to delay marriage. Moreover,the high price of houses has become the biggest obstacles for young people to get married. More and more people devote their time and money to themselves, not like before when they were forced to get married in the past for the family.

A better quality of life and environment in China

China’s Engel coefficient fell sharply since 1985. That’s to say,most of chinese gradually entered a relatively comfortable middle class life. The young generation, who are born from 1990s to 2000s, grew up with a strong sense of consumption and without insecurity about money.

Instead of saving money, or paying much attention to price–performance ratio, the young generation prefer to pay for services and personalization. This will also have a deep impact on the future of the consumer goods market in China. First of all, brand concentration will certainly increase. Second, the personalized product is also a direction. In the end, there will be more demand for service-type goods, and also the classy package of goods will be important to show the personality and taste of its user.

Trading up is everywhere


In the past few years, the market share of brand merchants has risen rapidly. No matter it is food, clothing,or housing, people are increasingly spending more on branded products. Young people are still eating snacks, but instead of having street food, they prefer sitting in a clean, well-decorated resturant.
In Shanghai, more and more old convenience stores are beginning to disappear and replaced by new convenience stores with better services and products. For example, the family, seven-eleven, Rosen and so on. Many people love buying seafood in Hema , a chain supermarket run by Alibaba. Although the price of those crabs and shrimps is relatively high, they are willing to pay more to experience good services and buy quality-guaranteed products.

Let’s have a look at bubble tea in china. Nowadays, people are hardly drawn to lowly-priced bubble teas. some beverage brands which sell cheap  bubble tea are not so popular as they used to. Instead, some brands such as Xi Tea and Lele Tea are constantly lining up for highly-priced bubble teas . Recently, Lele Tea has come up with a new product named Zangzang Tea. It becomes a big hit once it comes out. people are actually willing to pay more than 20 yuans and line up for hours to get a cup of Zangzang tea.

Changes in comsumption trends brought about by changes in economic structure

If we look at datas in recent years, we can find the changes. For example, the consumption in food, beverage, and tobacco has dropped from 37% in 2005 to 30% in 2015. On the other hand, the house-related consumption has increased dramatically from 10% in 2005 to 22% in 2015. It also reflected the large scale of urbanization. More and more Chinese people have their own homes, and tend to invest in real estate. 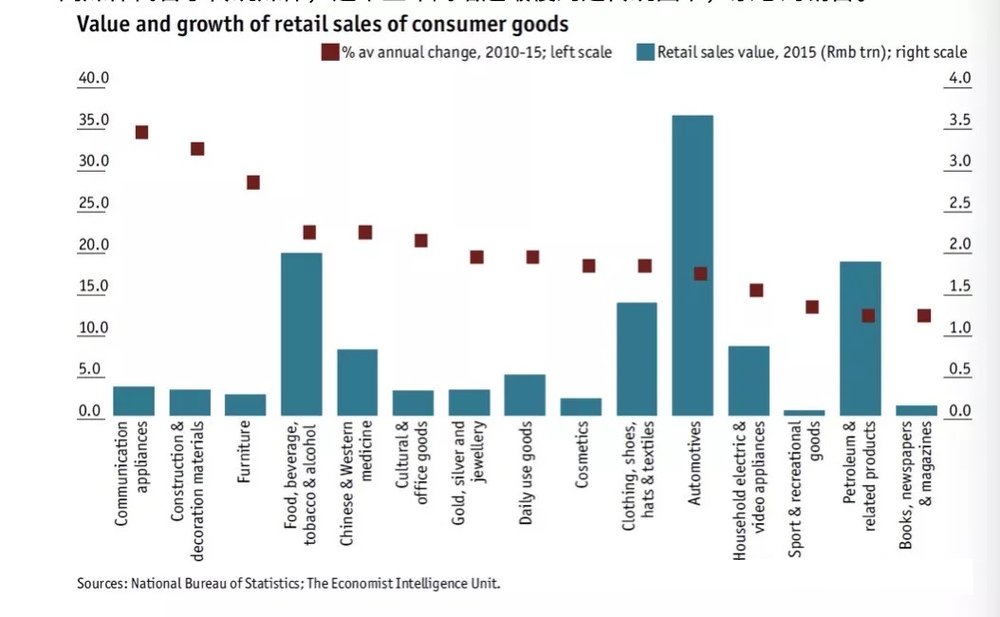 Another business opportunity comes from financial services. As wealth grows, the demand for financial services will also increase dramatically. When people have no money, they can only hold cash. With some money, they will start deposit them in banks. With more money, they will buy stocks and funds. Wealthy people certainly need wealth management services. According to data in 2012, China’s per capita holdings of financial assets are 120,000 yuan, of which 76% is in the form of deposits. As we can see in the chart below, the bigger the holding of financial assets, the higher the different types of assets held. 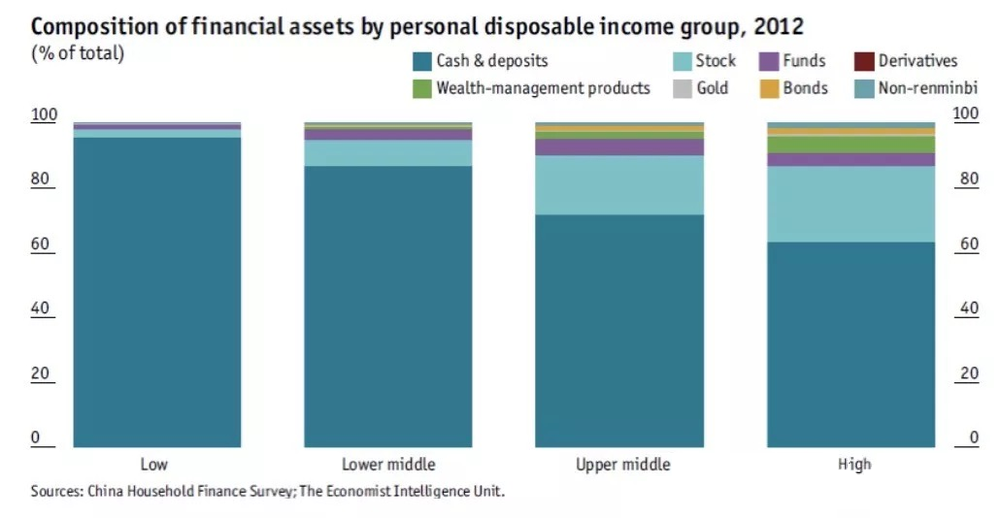 Trading up is the big trend in the future

Whether trading up or trading down is related to macro-economy. China will probably become the country with the largest number of middle class in the world. Trading up is everywhere. Behind it it’s the benefits brought by rapid economic growth over the past 30 years.