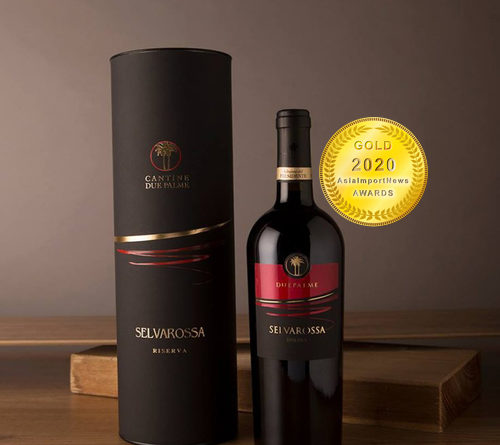 “Due Palme is precisely the story of a dream. The vision of a man, the third generation of a family of winemakers, who inherited the family winery and who invested passion and love in his land. “

Established in 1989, today Cantine Due Palme has become leader in the production of the most typical varieties in Salento, combining tradition and high technology (Negroamaro, Malvasia Nera, Primitivo and Susumaniello as main varieties). The production stages, from the cellar to the bottling line, though aging facilities, are guaranteed by meticulous quality controls.

Due Palme wines show off on their rear labels an important text: “fully produced” (summer bottled). Two words that guarantee to the consumer that wine is totally traceable and made in high quality. Thanks to their strategic vision and attentive practices in the vineyards as in the cellars, we have been able to build a strong and credible reputation, producing wines that delight the public as well as critics. A key feature is Alberello, literally “small tree”: this traditional method of bush vine cultivation produces very concentrated and complex fruits.

Cantine Due Palme is a symbol of excellence in Apulia, an important testament to the territory, to the history and culture. Immersed in an atmosphere of passion, enthusiasm and pride in their products, it has established itself successfully in Italian and foreign markets, assisted by an annual production of about 12 million bottles and to play a role in the internationalization of Italian wines.

THE PASSION OF A MAN. HIS LOVE FOR HIS LAND

Angelo Maci is certainly no exception; the opposite in fact. Uprooting him from the depths of Salento – where he was born in 1943 – from its vines and that fervent, amiable community would deprive him of every trusted point of reference. That is, the topos and humus, in which his personality grew. It is the only route to understanding the role played by the man; or rather, his daring projects and legitimate ambitions.

TASTING NOTES: A deep ruby ​​red in color with blue depths; on the nose the red fruits dominate with jam and notes of graphite pencil to finish. On the palate it shows a splendid balance between ripe fruit and minerality. An excellent long finish.

It should also be mentioned that Susumaniello grapes are particularly rich in anthocyanins which being anti-oxidants have numerous health benefits.

TASTING NOTES: Packed with spiced plum and raspberry flavour, this is a rich, dark, velvety red. It’s from maestro of Puglia, Angelo Maci, and his pride and joy winery that has twice been voted southern Italy’s finest. A regular customer top favourite.

Pillastro is one of our bestselling Italian reds – customers love all that richness, warmth and bold, ripe fruit. It comes from Puglia, in Italy’s deep south, best known for big, smoky wines made from prized local varieties Primitivo and Negroamaro. This 2019 is from Angelo Maci, a leading figure in the quality revolution of the last two decades, whose cellar Cantine Due Palme has twice been named ‘Winery of the Year’. Angelo himself has been awarded a Lifetime Achievement award too. Made purely from Primitivo, this is a rich, powerful red. A period of oak ageing has infused the wine’s generous plum and damson character with notes of spice and vanilla. Enjoy with hearty casseroles, pasta with a rich tomato sauce, or garlic roasted lam

TASTING NOTES: it  has a deep ruby ​​red color with intense violet reflections. On the nose, each element is marked by elegance and softness. On the palate it is full-bodied, soft and rich in noble tannins, with a vanilla and cocoa finish.

TASTING NOTES:  highly appreciated by young people as it is versatile and easy to drink, thanks above all to the hints of fresh red berry fruit, such as cherries and marasca cherries. Brilliant ruby ​​red, the nose is fine and fruity.

To know more about Cantine Due Palme please visit their website HERE: