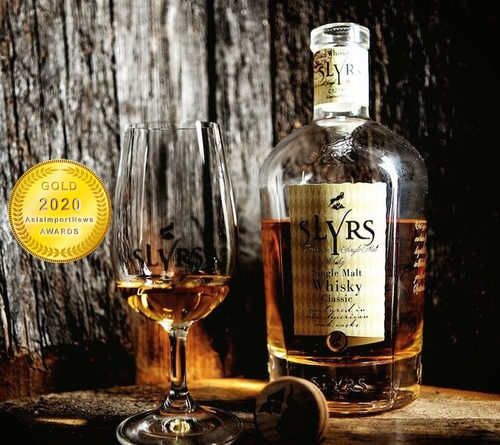 Slyrs Distillery is located at the Schliersee lake, it ranks among the best-known whisky distilleries in Germany. Its name is derived from the old name of the region. The first whisky was already distilled on the stills of the traditional Lantenhammer distillery in 1999, but in 2007 Slyrs whisky found its home in the newly erected Slyrs Distillery in Neuhaus. , is as peculiar to him as the Bavarian lederhosen.

Bavaria is home to their versatile SLYRS whiskeys, which together make up their SLYRS clan. The passionate SLYRS distillers create high-quality Bavarian single malt whiskeys and whiskey-liqueurs there day after day with a great deal of instinct, love for the product and a great deal of experimentation. Unique in variety, quality and character, the SLYRS clan not only inspires connoisseurs worldwide.

Barley forms the basis of every malt whiskey. They use a two-line spring barley for their SLYRS. It ripens gently in the north of Bavaria, on the fertile soils of the Franconian Jura. It can also be found in the best quality in the Munich area. After careful malting in a special malt house, it is gently kilned, i.e. dried. This gives our SLYRS the typical, pleasantly spicy smoke taste. Together with their mountain spring water and the aromatic mountain air, it gives it its unmistakable Bavarian character.

The quality of a whiskey depends on the water used. SLYRS is very lucky to have the purest, mineral-rich mountain spring water right in front of the distillery, so to speak.  SLYRS water comes from the Bannwald spring in the Schliersee Alps. Its purity and quality determine the unique taste of our Bavarian Single Malt Whiskey in an outstanding way.

The fermentation is not only the basis for the alcohol, but also for the variety of flavors of the SLYRS whiskeys. The specially developed SLYRS fermentation process takes several days.

In order to maintain the typical SLYRS aroma profile, SLYRS use special whiskey yeasts in addition to a temperature-controlled fermentation process.

The choice of the wooden barrel plays an outstanding role in the maturation process of a whiskey.

At SLYRS only valuable quality barrels made from American white oak from the barrel manufacturer “World Cooperage” are used.

The white oak wood gives our SLYRS a wonderful aroma. The fine charcoal layer that is created when the barrels burn out is another nuance.

After a maturation period of three to six years, part of our whiskey is poured into well-traveled casks, including the Bodegas Tradición / Jerez, for special finishes. This creates noble rarities with an individual taste. By the way, our pride, the SLYRS Aged 12 Years, is matured in traditional barrels from our own house. The SLYRS Mountain Edition, which breathes high air in our high-altitude camp at the summit of the Stümpfling mountain, also rests in American white oak barrels.

From fruity-malty to powerfully complex to multi-faceted and grown-up: each of these three SLYRS Premium Whiskeys, from the SLYRS Classic to the SLYRS Fifty One with 51% vol. To our SLYRS Aged 12 Years, embodies its very own flavor and has been since extremely popular for many years ̶ real classics, combined in a premium range.

Fruity, sweet, dry or spicy – the aroma wheel characterizes every SLYRS Whiskey and SLYRS Whiskey Liqueur according to its dominant flavors.

It is used for classification and comparison before and during a tasting and helps in the search for your personal SLYRS favorite product.

During a study trip to Scotland in 1994, Florian Stettler noticed that the landscapes and the clean air of Scotland and his home at Schliersee in Bavaria are not that different at all. Why not produce whisky in Bavaria, then? A bet with his travelling companion for a crate of beer sealed the plan. Back home he soon started to distil the mash he received from the Hopf Brewery in Miesbach on the fruit stills of the Lantenhammer distillery, which had been operated by his family for generations. In the beginning the batches were very small, so the whisky always sold out quickly after each release (which is still true today for most bottlings).

The big success proved Florian Stetter right, and in 2006 a completely new distillery was built for Slyrs whisky, where mashing and double distillation on pot stills now takes place on site.

Due to health reasons, in 2007 the committed whisky pioneer had to hand the distillery management over to his brother Anton Stetter, who continues Slyrs’s success story together with managing director Thomas Flothman and master distiller Hans Kemenater.

Taste : handy, present and elegant structure with a noticeable sweetness, aromas of marzipan and walnuts.

Taste : The whiskey Sauternes is fruity, light and fresh in summer with tones of vanilla and honey.