Maritávora – Investimentos, Lda. was founded with the aim of providing a business structure with a family activity with more than 150 years of history and tradition.

In the middle of the 19th century, José Junqueiro Júnior, father of the poet Guerra Junqueiro, acquired a group of farms and estates in the county of Freixo de Espada a Cinta in the Upper Douro, the great majority of which still remains in the possession of his direct descendants.

An old white grape vine planted by our ancestor at the end of the 19th century remains still in production today, giving rise to the Maritávora No. 1 Grande Reserva Branco.

Maritávora – Investimentos, Lda is Located at an average altitude of about 500m, on shaley soils with a lot of stoniness, the vines occupy an area of ​​about 15 hectares.
The white vineyard, which gives rise to the Maritávora No. 1 Grande Reserva Branco wine, is a small vineyard with less than one hectare that has been in production for more than 100 years, although other vineyards that were close to it have already been plucked and replanted. This little treasure was maintained thanks to the perseverance and affection of several generations. The vines are aged between 20 and 70 years.
The vineyard is based on typical Douro vine varieties. The vineyard is not irrigated and the Guyot driving system is used. Yields are low, and bunches are used. Most operations, from pruning to harvesting, are done manually, while maintaining respect for the environment for decades.
All the vineyards of Quinta de Maritávora are in Biological Agriculture mode.

Maritávora – Investimentos, Lda project’s main objective is the enhancement of the cultural and family heritage, promoting the production and marketing of wines and other superior quality products in the Upper Douro region in Freixo de county de Espada a Cinta, taking as reference values:
1.  The preservation of the family legacy (patrimonial and cultural);
2.  Respect for the people involved in the project;
3.  Respect for the environment;
4.  The creation of high quality products;
5. The use of traditional techniques combined with modern technologies in permanent innovation. 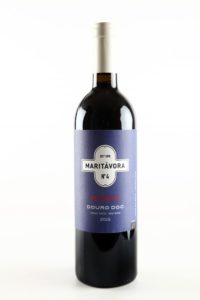 This wine was made from grapes of the Touriga Nacional, Tinta Roriz, Touriga Franca and others, from 15 to 50 year old vines. Fermented in stone mills with foot steps. He aged 18 months in French oak barrels. 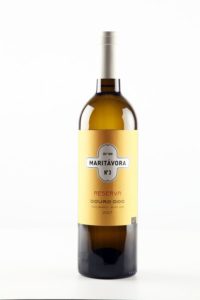 Made from grapes from vines aged between 4 and 50 years from the varieties Códega do Larinho, Rabigato and Viosinho, among others.

Partially fermented in new French oak barrels, with 3 months of battonage, having aged 7 months in barrel. The other part was fermented in stainless steel tanks with controlled temperature.

For more information about the company and their product please CLICK HERE: