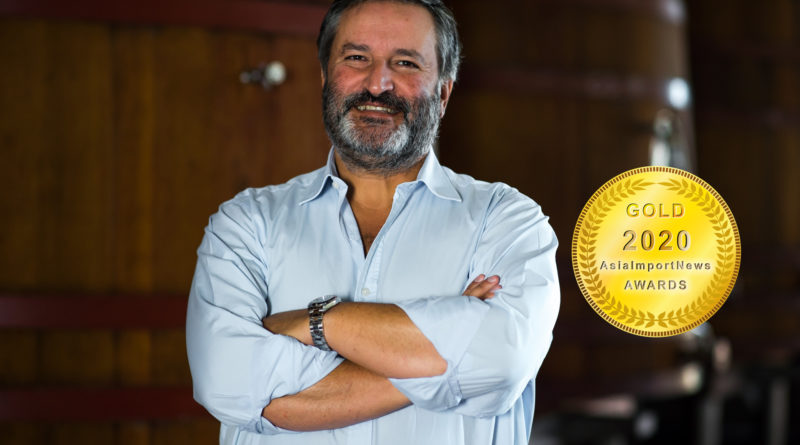 José Abreu da Mota Capitão has produced unquestionably distinctive wines from its very genesis. Its first wines – Herdade do Portocarro, Anima and Cavalo Maluco they were immediately positioned amongst the top rated national wines. The project is based on a philosophy of production of finest wines in limited and exclusive quantities. Wines that impress and enthrall, thus providing unique moments for the most demanding consumers.

The Herdade consists of an 18 hectare south-facing vineyard and a paddy field, directly on the Sado River, where biodynamic rice cultivation is carried out, which is sold under the name “Loverice” throughout Europe in specialist gourmet shops.

Herdade do Portocarro wines possess a intense and complex personality. They are tense and earthy but also extremely elegant and fresh. They are aimed at a sophisticated, educated and sensitive consumer who looks for and enjoys to taste the difference.

According to the highly respected Larrousse Guide, terroir is a French word with no translation in any other language. Terroir means the most intimate relationship established between soil and a unique micro-climate. These are behind the birth of a specific type of grape, one that will freely express the quality, typicality and identity of a great wine – without one really understanding “why”. In Portocarro, we believe that the terroir also reflects the hand that interacts with the vineyard, the grapes, the grape must and their wines.

Herdade do Portocarro vineyards are divided into 3 different areas: in Portocarro (São Romão do Sado), by the river Sado, on the region’s highest hilltop facing South, where the sun’s intensity during the day is massive and a light breeze coming from the ocean at night lowers the vineyard’s temperature to 16oC. This enables the grapes to rest – whilst developing into
their uniqueness – and to deliver an extremely fresh and elegant product. The terroir is characterized by a light clay soil with a high level of calcium and sílica.

The “Herdade do Portocarro” winery is located south of Lisbon, in the Alcácer do Sal district, surrounded by olive groves and paddocks, in the middle of a fertile and idyllic area in which the ancient Romans already grew wine, as evidenced by the discovery of old coins and wine amphorae , In administrative terms, the property belongs to the region of the  Setúbal peninsula, but geographically speaking it is in the Alentejo.

Here there is a warm to temperate Mediterranean climate with hot, dry summers and mild, rainy winters, which is characterized by the proximity of the sea and which is reflected in the exceptional quality of the wines.

In the Grândola hills, at Pêgo da Moura, they grow part of the white varieties (Antão Vaz and Arinto), benefiting from the ocean’s proximity and from a harsh schist soil, where the vineyard was painstakingly planted amongst rocks and slopes. A very windy, very cool piece of land with a terrific sun exposure. Lastly, by the ocean, less than 5-6 km from Melides area, they have two types of vineyards: a century-old one (over 120 years), of “pé-franco” (no vine-grafting), where we produce a Boal Pé Franco (white) and a Castelão (red). Unique, fresh, mysterious, timeless! We also have new vineyards with Castelão (red), Galego Dourado, Sercial, Arinto and Antão Vaz (all white varieties). The soil is composed of black sand and is very deep, very cool, keeping us dreaming of the next vintage!

This wine is the purest expression of Atlantic coast. To the impetuous Sercial and Galego Dourado, we have added the fruit of Antão Vaz and the Arinto’s plasticity. All grape varieties that grow by the sea. A wine with a long life which requires some attention when we think about food pairing. It was conceived for celebrations, for moments of happiness and communion. A rich seafood platter, goose barnacles, oysters, “bruxas” (tiny slipper lobsters) and some lovely “navalheiras” (soft-shell velvet crabs), followed by a succulent 2 kg turbot lightly grilled. Cheers everyone! In the background, in a low tone, songs by Queen. Here and there Freddie Mercury’s mighty voice makes itself heard through the chatter and laughter…